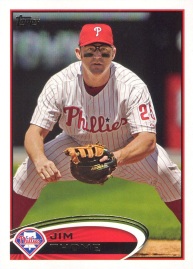 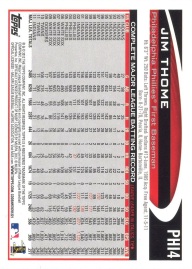 Set Type: Primary
Card dimensions: 2½” x 3½”
Additional Information/14,000 Phillies Commentary: Issued in a blister pack, Topps released this set after the first series of 2012 Topps and 2012 Topps Opening Day, and before the second series of 2012 Topps. Unfortunately, for the first time since issuing the set in 2006, Topps did not include at least one card containing a photo that differed from the player’s card in the regular Topps set. The photos on the Kendrick and Mayberry, Jr. cards are cropped differently from their cards in the regular Topps set, but only slightly. Unless you absolutely needs a 2012 Topps card showing Citizens Bank Park, you can completely skip this set if you already own a complete 2012 Topps Phillies team set.

This entry was posted in Jim Thome, Phillies Database Project. Bookmark the permalink.