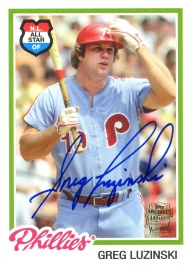 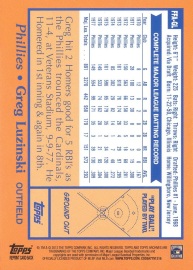 Set Type: Insert
Card dimensions: 2½” x 3½”
Additional Information: Inserted in packs of 2012 Topps Archives. Beckett’s online guide refers to the set simply as “2012 Topps Archives Autographs.” In the checklist below, the design year that Topps replicated for the card is in parenthesis after the player’s name.
14,000 Phillies Commentary: All the cards bear new design/photo combinations on the front, and with the exception of the Luzinski and Boone cards, they also appear in the regular 2012 Topps Archives set as short prints. I really wish Topps had included Luzinski and Boone in the base set as well, because I would love to place non-autographed versions of those cards alongside the 1978 and 1979 originals. In addition, I really wish Topps would do just a little more footwork when issuing autographs like these. In this set, Von Hayes is the only player autographing cards as a Phillie for the first time. I’ve ranted about this before, but it bears repeating: there is a horde of retired Phillies who have never appeared on an autograph card as a Phillie, and for various reasons deserve such an honor. Tony Taylor, Cookie Rojas, Dallas Green, John Denny, Art Mahaffey, Tommy Greene, Terry Mulholland, Rick Wise & Juan Samuel are the ones who immediately come to mind.  Is it really that difficult for Topps to exercise some due diligence on this front?

My other, admittedly very tiny, nitpick about the set is the use of the 1993 design for the Kruk card. Topps already issued an autograph for Kruk using that design in the 2005 Topps Fan Favorites set, and while it is a different picture on this year’s card, Topps could have also used any of the 1989, 1990 or 1994 designs and at least made the card feel just a little more different. This isn’t the first time, however, Topps did something like this: the 2002 Topps Archives and 2003 Topps Fan Favorites sets both contained auograph inserts of Lenny Dykstra that used the ’93 design.

This entry was posted in Greg Luzinski. Bookmark the permalink.