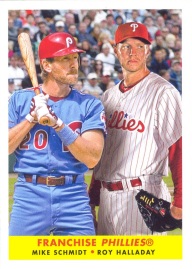 Set Type: Insert
Card dimensions: 2½” x 3½”
Additional Information: Inserted in packs of 2012 Topps Archives. Beckett simply refers to the set as “2012 Topps Archives Combos.”
14,000 Phillies Commentary: As I was scanning the sole Phillies card in the set, it occurred to me that the original 1958 Topps set did not contain a Phillies combo card. Furthermore, Topps has never issued a card featuring both of the Hall of Famers who played the entirety of the ’50s for The Fightins. Let that sink in for a minute… Topps has never issued a card featuring both Richie Ashburn and Robin Roberts. In fact, according to the Beckett online guide, there has only been one card picturing the two of them together (not counting signature cut cards from last year’s 2011 SP Legendary Cuts). Because Beckett does not list most of them, I did a cursory scan of the Phillies Team Issue sets over the past 30 years and tentatively confirmed what I thought: the Phillies haven’t issued one either.

All this is just a way of saying that while the Schmidt/Halladay card is awesome, it would have been even more specatacular if Topps instead made a similar card for Ashburn and Roberts — especially given that the ’58 design would have been perfect for such an endeavor.

This entry was posted in Mike Schmidt, Roy Halladay. Bookmark the permalink.