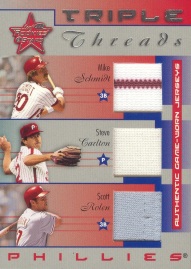 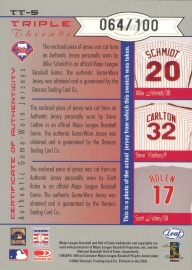 Set Type: Insert
Card Dimensions: 2½” x 3½”
Additional Information: Cards were inserted in  packs of 2002 Leaf Rookies & Stars. Back of cards are serial-numbered to 100. As the card states, it contains jersey swatches for all three players.
14,000 Phillies Commentary: During the 2004-2008 time period, I had to sell of a lot of my collection to stay afloat financially. This was one of the cards that went at that time, and I just replaced it. Given that only 100 were made, there is a very small, but not completely insignificant chance that I may have the same card again. Because I didn’t record that type of detail when noting what I sold, there’s no way for me to know. However, I do know that I reacquired it for less than I sold it for (and that’s before adjusting for inflation), so in the long run, I came out ahead.

By the way, you know that if Topps made a similar card today, they would have issued at least four different parallels, one of which bearing a “1/1” serial number, and at first glance you probably wouldn’t be able to tell the versions apart — even if placed directly side-by-side.