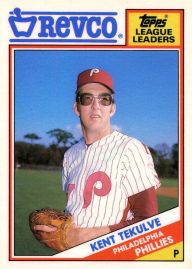 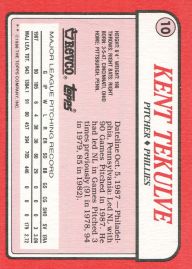 Set Type: Primary
Card dimensions: 2½” x 3½”
Additional Information/14,000 Phillies Commentary: One of the many 33-card box sets produced by Topps throughout the mid-to-late ’80s. Topps produced this set for the Revco drug store retail chain. SCD’s 2011 Standard Catalog simply lists the set as “1988 Revco,” which is interesting because Fleer also produced a boxed set for Revco that year.

Some day, when my son is old enough, I will explain to him that when I was his age, the major card companies each only produced one set per year, and that finding these box sets was the closest we came to “chase” cards. In fact, I didn’t properly acquire all the Phillies from the various Topps and Fleer box sets until sometime during the late ’90s. Thanks to eBay, I know now how overproduced they really were — especially given the overwhelmingly regional distribution of so many of the sets — and that most of them can still be had for the same price it cost to buy them when they were new. Frequently, you can get them for less.

This entry was posted in Kent Tekulve. Bookmark the permalink.