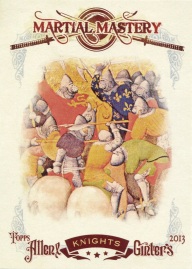 Yesterday, I reaffirmed my love for sets that reuse vintage designs; this extends to sets inspired by vintage designs. I thought that the 2005 Topps Cracker Jack was a nice update the classic Cracker Jack design and I have absolutely loved the follow-ups to Topps’s first Gypsy Queen set — I particularly hope that Topps does not stop producing those anytime soon. Yet, I have not been as big fan of Topps’s Allen & Ginter’s (A&G) brand over the years. The primary reason for this has been the inclusion of cards highlighting individuals, items and locations outside of MLB. I am fully aware that this is keeping in within the spirit of the original Allen & Ginter sets from the late 19th century, and as such I don’t fault Topps for their inclusion. Furthermore, since I primarily collect Phillies cards, this isn’t that much of a concern. However, for this very reason alone I very rarely buy packs of A&G and am even less likely to ever attempt completing a set, or even buy one already complete. That doesn’t negate, 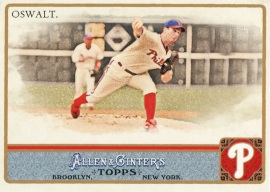 however, my looking forward to how the Phillies in the set look, and I have to say that I am very pleased with the 2013 edition.

Last year’s set featured what looks like an overcorrection to a major mistake Topps made in 2011. I’m sure that creating a design to look very similar to a iconic 19th century set while simultaneously sporting a new look must be difficult, but the 2011 set just looked too modern; the solid, rounded border looked like it came straight from the 1980 Topps set, and team logos do not belong anywhere on a set harkening to the 1880s — very few teams (if any) actually had anything that could reasonably called a logo back then. It appears that Topps realized this after the fact, but the effort to make the border on the 2012 set look like it could’ve been from roughly 1887

was far too intricate. Furthermore, the stylized art deco font for the A&G brand name actually looked like it belonged on a movie poster from the 1920s. It was actually a decent retro design, but still too modern, for completely different reasons.

This year’s edition of A&G, now in its eighth year, finally gets it right. Everything about the set screams 19th century design. The fonts look period appropriate and the lined border manages to be decorative without becoming ornate. Furthermore, Topps even managed to avoid their mistake from the 2010 set by leaving the area around the photo predominantly white. It’s a very clean look, and is easily Topps’s best A&G base set effort since it started to create new designs that were clearly different from the ones used by the original Allen & Ginter cards.

From a Phillies collector’s perspective, the player selection is decent given that once again, as with the Archives set, the team’s decline over the past couple seasons means a drop in the number of Phillies cards from last year’s set (only 11 Phillies this year, as opposed to 14 last). The only real omission is from the base set is Rollins, who gets a Mini Framed Relic insert card, which helps to remove the injustice of not seeing one of the most important players in franchise history in the set (regardless of how you feel about Rollins, this is an indisputable fact). The nicest thing about the base set has to be the inclusion of, for Topps, a new picture for John Kruk. It’s not completely new as Donruss used it in its 2005 Donruss Timeless Treasures Material Ink cards, but it’s still nice to see Topps finally select a new photo.

The parallels and relic insets are basically what we’ve come to expect from Topps’s A&G set over the years, so there’s little need to go over most of them. However, I would like to know how/why Topps chooses to include some relic cards in a standard-sized format while other are issued as a Framed Mini Relic 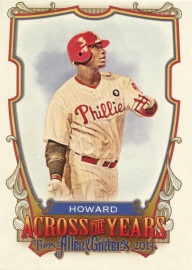 as I can’t discern any pattern to the process. This year’s unique, big, concept insert set is Across the Years. The thing about insert cards are they really are just flimsy excuses to make more cards of star players. However, manufacturers attempt to give a justification the existence of most insert sets — including previous, similar past A&G insert sets such as last year’s What’s in a Name in 2012 and 2o11’s Hometown Heroes — by providing information that you won’t find about the ballplayer in his base set card. This really isn’t the case with Across the Years, which lists events that occurred on the player’s birth date and the names of other celebrities who share the same birthday. Interesting idea, but with no real information about the player depicted on the front, it does drive home the fact that inserts really are nothing more than excuses to print more cards of the game’s stars (the same criticism can be leveled at the This Day in History insert set in 2010 A&G). 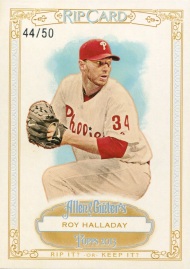 to the point where I really want to rant against a particular element of A&G: the Rip Cards. Before I start, I understand that Topps shows no inclination to discontinue producing them and that they are here to stay. Nonetheless, every time I see one, I wish a pox upon the people at Topps who continue to allow the production of these cards. I hate them because they’re an extraordinarily unnecessary gimmick that requires the destruction of a card. In addition, most people just haven’t figured out that you can very carefully slice open a Rip Card using something like an X-Acto Knife and leave the back far more intact than just ripping it. As a result, most opened Rip Cards just look terrible on the back. Furthermore, each card that isn’t ripped means there’s a card that has been, for all practical purposes, produced and deliberately withheld from the hobby.

Admittedly, I can’t afford 1/1 cards in 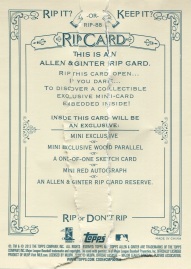 nearly all instances, but that’s not the point. You don’t announce the making of a 1/1 card or special extremely limited mini inserts and then leave the hobby wondering if/when it will finally emerge from its prison. I really wish Topps would just seed all the cards buried in Rip Card directly into packs and just transform the Rip Cards into a super-limited, serial-numbered insert set. Instead, this year Topps decided to double-down on the Rip Card idea and create Double Rip Cards. Now, you have a card in which the picture on both sides of the card can be ruined. At least before, the front of the card could be left intact and otherwise pristine. Not anymore. I don’t just wish a pox on the idiots who came up with and approved this concept — I wish a pox on their entire genetic line.

Sadly, I doubt that my wishing a pox upon the people behind the Double Rip Cards will work, which means that they will become another staple in the A&G line, and we will continue to see even more otherwise rare cards either desecrated or forever locked away from the hobby for no rational reason whatsoever.