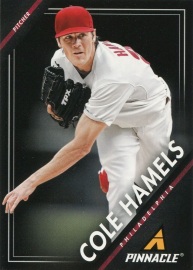 As I’ve stated before, I want to see Topps’s monopoly on MLB-sanctioned card broken (even if it won’t happen until 2020, at the absolute earliest), but I can’t bring myself to stop collecting their cards because of what it will do to my collection. Thus, the only way to make my displeasure known is start spreading some of my collecting budget around to the sets that only bear MLBPA approval. Yes, I’m going to have to live without MLB logos and team names, but such cards have been around for over 40 years now. In fact, some of my personal favorite oddball Phillies releases were produced by Michael Schecter Associates, the longtime, indisputable king of such sets from the ’70s through the mid ’90s.

However, the playing field has changed

somehow since sets bearing the MSA copyright freely roamed the land. MLB is paying much closer attention than they used to. Back in the ’70s and early ’80s it wasn’t uncommon to still see the use of team monikers on such issues, even if it wasn’t completely legal. Furthermore, MLB’s legal team is making harder for the MLBPA-approved sets to bear photography that links the photograph to a facility in which MLB games are played. True, today’s digital photo manipulation technology makes it easier to perform all the tasks necessary to keep the MLB lawyers at bay, but it’s hard to escape the end result: regardless of quality, the photos in the cards just seem to lack a vibrancy found in even the blandest Topps issue. As a result, one needs to judge the MLBPA-sanctioned issues with a different set of criteria. 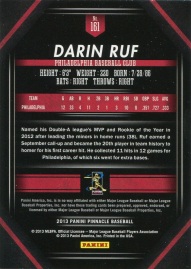 With that in mind, there’s quite a lot to like about Panini’s revivial of the Pinnacle brand. It works as a decent low-end set, a kind of throwback set I alluded to a couple days ago: no foil or other printing gimmicks, a limited number of parallels and no SPs. Furthermore, Panini designed the fronts to reflect the designs of the original Pinnacle releases; most notably, the all black borders, and rookie cards grouped together in a subset. Even the parallels are resurrections of the original sets’ parallels: Artist’s Proofs and Museum Collection. Unfortunately, the backs look nothing like the backs of the 1992 & 1993 sets which fronts of the 2013 edition clearly evoke. Most notable is the absence of player portraits on the back, and it would’ve been nice to see Panini make such an effort on this release. Beyond that, it just looks like a different design aesthetic altogether, which is

a shame given that the fronts of the 2013 set make it look like a natural predecessor to those earlier releases.

As for the Phillies player selection, the huge emphasis on rookies, which encompasses fully ¼ of the whole 200-card set, leads to Darrin Ruf and Tyler Cloyd pushing out a couple Phillies who probably should’ve been included instead — most notably, Cliff Lee. In addition, I’m not sold on the inclusion of Michael Young in the set, but clearly both Panini and Topps both felt that his presence in many sets this year was more important than the inclusion of Jimmy Rollins, whose status seems most impacted in sets hovering around this size. With just four other cards in the set, it’s hard to quibble with the remaining player choices: Chase Utley, Roy Halladay, Cole Hamels, and Ryan Howard.

There are two really notable aspects to the set’s inserts. First, we get Tyler Cloyd’s first autograph card properly showing him in “Philadelphia” attire. Topps still hasn’t issued a Cloyd autograph card — though to be fair, I think that is a borderline defensible position from Topps’s standpoint as Cloyd really is little more than a AAAA roster filler material. So, at this time this is the closest you are going to get to a true Cloyd Phillies autograph card. (His only previous autograph card, also a Panini release, shows him in either minor league or collegiate attire and looks even less like “real” Philadelphia card.) Second, Chase Utley gets a lot of insert attention in this set and is the only Phillie with multiple inserts, checking in with three. This is a refreshing change from what I’ve seen this year from Topps, who seems to have largely forgotten that even with all his injuries over the past few seasons, he’s still produced as one of the game’s elite second basemen.

those insert sets, Clear Vision, is a real puzzler. There’s no explanatory text whatsoever on any of these cards whatsoever, so without seeing the marketing material, I cannot make any sense of why players were selected for this insert. Additionally, I am unable to discern neither the rationale behind the various parallels for this set; the parallels each bear a different word on them — in the case of the pitchers, they are “Complete Game,” “No Hitter,” “Win,” “Shutout, and “Perfect Game.” Furthermore, are the parallels printed equally or in varying numbers? Once again, we have an insert set that serves no purpose whatsoever (not even a thinly applied one), other than to provide an excuse to print more cards of star players. At least thus far Panini hasn’t reused the same photo of Utley in any of its sets — though, admittedly, that’s a little easier for them since they don’t product as much product as Topps.

Given the restraints the lack of MLB approval placed upon Panini, 2013 Pinnacle is a fairly decent set. Although it will never become a set collector’s will look fondly upon, it works well in the low-end segment of the hobby that the manufacturers really neglect since it’s not a huge money maker. Furthermore it provides an interesting glimpse into what Panini or Upper Deck, when they finally come around to issuing their first new baseball cards in three years, might produce should either of them decides to issue a comprehensive set of baseball players who play at the highest professional level in America. I, for one, am hoping such a set comes out sooner than later.