Over the course of 2013, the onslaught of Darin Ruf cards — especially the autographed variety — struck me as one of the more fascinating developments of the year. With the acquisition of his card from 2013 Panini America’s Pastime, which I assume is t 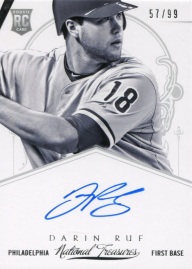 he last set of 2013, I had added 23 Darin Ruf cards from various products released over the year. All of these cards were unique — meaning that parallels did not pad my total — and 11 of them were autograph cards.

As a Phillies collector, it’s been a long time since I’ve seen this type of rookie/prospect boom. In fact, the last time I saw anything like this was when Michael Bourn was making lots of noise in the upper levels of the Phillies farm system — as hyped as Domonic Brown was among Phillies fans back in 2010, Topps really didn’t produce a glut of Domonic Brown cards in the same way it did for the likes of Bryce Harper, Stephen Strasburg, and Yasiel Puig over the past few years. Mind you, the lack of a Phillies rookie/prospect baseball card boom is directly attributable to the fact that there are far fewer sets than there were approximately 10 years ago and, more importantly, to the lack of real prospects working their way through the farm system since they began their run of division titles in 2007. 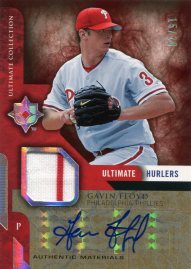 likely going to be a rookie/prospect bust on Ruf. Nothing against him as a ballplayer — in fact, I think the Phillies organization has horribly undervalued him because at 27 he is too old to be considered a legitimate prospect. However, I just don’t see him having a great major league career, not even the type of late-bloomer career enjoyed by the likes of Raúl Ibañez. So, unlike Ryan Howard or Cole Hamels, each of whom saw a surge of autograph and memorabilia cards in the few-year period surrounding their Major League debuts, Darin Ruf is likely to join the likes of Gavin Floyd, Zack Segovia, and Johnny Estrada in the ranks of former Phillies rookies/prospects whom you can easily and cheaply acquire lots of autograph cards.

I feel like I would be remiss if I didn’t mention one other name: Marlon Byrd. I don’t know if he necessarily belongs in the same class as Floyd and Estrada, but you can easily obtain plenty of Byrd’s memorabilia and autograph cards from his first stint with the team. My collection contains 19 cards bearing his autograph 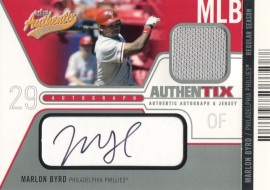 and 14 cards with a piece of memorabilia embedded upon it, and there are still plenty of such cards I can inexpensively and easily add without resorting to parallels to pad the numbers (forgive me for not running a report from the database to see just how many options there are, but I know the number is ridiculous). Given how much the hobby has changed since Byrd’s Major League debut, I’m fairly certain Phillies collectors will never again experience anything like the barrage of autograph and memorabilia cards that occurred early in his career. I must admit, however, that I am eager to see whether or not Topps or Panini will decide to issue new autograph and memorabilia cards for his second stint on the team.