For my first post of the year, a random assortment of items to get off my plate:

Congratulations to Pedro Martinez for replacing Mike Schmidt as the most recent former Phillie to make the Hall of Fame. That means the Phillies went a little over 20 years (early 1989 through late 2009) between fielding Hall of Famers. As John Stolnis recently pointed out over on The Good Phight, it’s 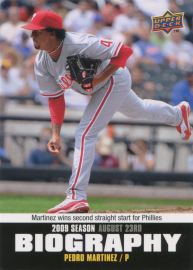 hard to get into the Hall of Fame, and if any of the Hamels-Rollins-Utley-Howard-Lee Phillies core (Stolnis excludes Halladay from that group) during that awesome 2007-2011 run are going to gain entrance into the Hall, then it’s going to take a at least a few more years of excellence….

Pedro’s limited run with the Phillies resulted in a far fewer Phillies cards than you might think. I show only 32 cards in my database, but when you filter out the parallels and printing plates, the number drops to a mere 16. Furthermore, you filter out the cards where he’s pictured with either the Red Sox or Mets (but still denoted as a Phillie), the number drops to 11. What’s really astounding is that he didn’t appear in any of the Topps’s 2010 sets or the 2010 Upper Deck set (though he did appear on a few inserts for 2010 Upper Deck.) By way of comparison, my Phillies 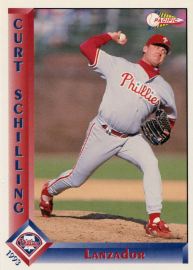 collection contains 18 different 2014 Roy Halladay cards, and I own almost none of the more expensive/limited parallels or inserts….

I feel like I should briefly note that I thoroughly believe Curt Schilling is a no-brainer Hall of Famer and have every expectation that he will eventually get into Hall, which will retroactively mitigate that 1989-2009 gap. However, I really do think that sometimes he would really be much, much better off just keeping his mouth shut. Lost votes for being an outspoken Republican? There are so many things wrong with such an assertion that I don’t know where to begin….

Final thought regarding this year’s Hall of Fame voting: thank goodness that Chris Olds at Beckett doesn’t get a vote….

Circling back to The Good Phight, dajafi’s “The All-‘Wait, That Guy Was a Phillie?’ Team” struck me as both far too limited in its scope and included a head-scratcher. Its requirements, which included that the individual had to be on an opening day 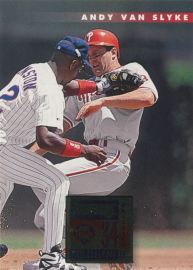 lineup during the 1991-2014 period, meant the exclusion of Andy Van Slyke and Fernando Valenzuela — both of whom are far more deserving of inclusion than a few of the individuals who were included. In particular, Dale Murphy — who was actually with the club for over two seasons, which is far too long for such a list — had no right appearing on it. It would’ve been much more fulfilling if he had done a little research, expanded the timeframe, and included such luminaries as Hack Wilson, who I covered in the early days of this blog, Lew Burdette, who never received a Phillies card for his efforts, Dick Groat, and, yes, Michael Young (though he’s fresh in our memories, in 15 years his stint will be remembered as well as Andy Van Slyke’s)….

Finally, Slate coincidentally ran an article on the Topps Bunt app a few days after my post about it. Just thought it was worth mentioning.