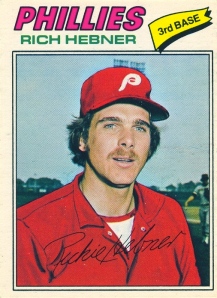 Since early last year, when I returned to collecting in a much more active fashion, one of my projects has been accumulating a comprehensive list of every Phillies card made. I figure that if I cannot actually afford to collect each and every Phillies card, I can at least find out about the existence of each and every card. Because I am sifting through and cross-referencing a number of sources — including my collection, the Beckett Online Price Guide, VintageCardPrices.com, the 2011 Sports Collectors Digest 2011 Standard Catalog of Baseball Cards and TeamSets4U.com — it’s a tedious and time-consuming process. However, I’m really enjoying this and almost compulsively finding a little time each day to expand the list (I’m sure the compulsiveness is somehow related to my Asperger’s, and I wonder how many compulsive collectors are actually undiagnosed Aspies.)

When starting this project, I fully expected to find lots of information on vintage pre-WW II cards that I didn’t previously have. Before I stopped collecting actively in 2003, my purchases and knowledge of those cards was limited to the big name sets from the ’10s and ’30s. Clearly, there were large gaps — such as strip cards, oddball issues and the various stores and companies who rebranded the M101-4 and M101-5 sets — requiring research. In addition, I expected to find lots of information on most of the sets I missed out on from 2003 through early 2010. What I didn’t expect was finding information on cards that I felt I should have known about and discovering cards that I never would have imagined existed.

The first of these was the 1998 Donruss Billy McMillon card. This was a card I should have known about and had. However, this was from just before the Internet changed collecting and at that time, I had to put together my team sets from visiting various dealers and searching through the product they opened. I guess that at that time I felt I had scoured through enough material to assume that my set was complete. Luckily for me, it was a very easy card to find and add, but the fact that I initially missed the card 13 years ago actually irritated me just a little bit.

This irritation was more than eliminated when a post over at The Phillies Room alerted me to the 1977 O-Pee-Chee Richie Hebner card. For the most part, I have paid little attention to the O-Pee-Chee cards because in my mind they are basically a parallel set (yes, I will cover them in my next post about parallel cards). Yes, they frequently updated team designations on the cards. However, those cards still used the same pictures, and when it came to displaying my cards, I had little interest in upsetting the appearance of nothing but Phillies photos with photos of other uniforms — even if the cards said that the player was now with the Phillies. Thus, it was very easy for me to be ignorant of the fact that in 1977 O-Pee-Chee actually did some airbrushing of their own, thus creating a Phillies card of Hebner that didn’t exist in the Topps issue. (It certainly didn’t help that the Beckett Online Price Guide does not list the card as a Phillies card.) I think this is the only time O-Pee-Chee did

something like this with a Phillie, but if I find others, I will be sure to track them down.

Just as surprising was when I recently found the 1990 SCD Baseball Card Price Guide Monthly Ricky Jordan. I knew about the series of baseball cards produced by Baseball Cards Monthly from 1989-1993 and have them all in my collection. However, I knew nothing about the SCD cards, and I only found out about the Ricky Jordan card when performing a simple “Phillies” search on eBay and just skimming through the first few hundred results. Admittedly, I would have eventually found the card when examining the corresponding pages in the 2011 SCD catalog, but actually stumbling onto the card via pure chance provided an element of pleasant surprise I wouldn’t have experienced finding about the card via research and cross-referencing.

The last of my recent surprises was another eBay find: a number of cards from the 1989 Score Rising Stars set. The situation was very similar to the one in which I discovered I was missing the 1998 Donruss McMillon card in that I had a few cards from the set already. Furthermore, for years (most likely, two decades) I thought I had a complete team set already. However, the difference is that I no longer have any recollection as to how I picked up the three cards I already had. Anyway, when searching for Phillies team sets on eBay, I came across a 1989 Score Rising Stars team set that listed in the title that it contained seven cards. For some reason, I recalled that I didn’t have that many in my set, and after a quick cross-check against SCD and Beckett, it became clear that I never actually owned a complete team set — in fact, I possessed less than half. The Shane Turner card here is one of the four I was missing.

I don’t know how many more pleasant surprises continue to await, but should I encounter another, I’ll be sure to share whatever it is.