Notes From the Database

I haven’t forgotten about my statement that I will start making some posts explaining my decisions that dictate how I enter information into the Phillies Baseball Card Database. I still have every intention of doing so. Until

then, to illustrate a prime example that drives many of those decisions, I give you Bobby Abreu’s 2008 Spectrum Retrospectrum Swatches #RS-BA2.

This card represents many of the issues I have with Beckett’s online database. Don’t get me wrong, it’s an incredibly valuable resource — in fact, it is a primary source from which I’ve drawn much of the information I’ve accumulated in the database. However, it is riddled with what I feel to be an unacceptable percentage of errors, which is compounded by the fact that the information isn’t always in the most collector-friendly format. I’ll start with the information that they provide on this particular Abreu card. First and foremost, they have team designation as New York Yankees. Yes, Abreu was a member of the Yankees in 2008, but in every way, this is clearly a Phillies card. If you are searching in the Beckett database for Phillies cards from 2008 Spectrum, this card will not come up in your search. I don’t know exactly what procedures Beckett follows when entering information into their database, but clearly no one engages in any meaningful error-checking.

Then there’s the card number. Beckett simply lists it as “BA2.” In the days when Beckett’s and SCD’s giant annual catalogs were the primary means by which you got checklists for particular sets and information regarding them, this type of shortening made sense. They needed ways to condense the information as much as possible, and eliminating prefixes on long card numbers was one way to do so. However, in an electronic format, there’s no reason to engage in such space-saving techniques, and compounding this sin, Beckett doesn’t let you search by a full card number in such cases. Spectrum is not necessarily the best example of where this can be an issue — a better one would involve a search for an insert from any Topps Triple Threads set using just the half of the card number that comes after the “-“. When you do so, you have to frequently engage in some process of  additional reading, research, and elimination just to determine which card you have.

So, these are just a couple of the differences you’ll find in the Phillies Baseball Card Database. However, I’m sorry to say that the 2008 Spectrum set isn’t in the version that’s currently online, but it will be when I post the next updated version, which will be within the next week or so. 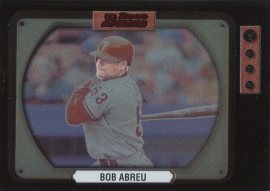 I still don’t know what to make of yesterday’s signing of Bobby Abreu to a minor league contract. The Phillies need to get younger, not older, and while Abreu has to earn the spot, I’d hate to think that this means less time for Darin Ruf, who despite the holes in his game, is a perfectly serviceable bat off the bench and fourth outfielder. On the other hand, if Abreu makes the team, the Phillies will enter the 2014 season with ⅔ of its starting lineup from 2003 — how many other teams can say that? (Snarky aside: how many other teams would be glad to say that?) In addition, it’s very hard for me to root against any player in his 40s trying to hang on to the game as long as possible.

Two other thoughts come to mind about Abreu. First, he truly is a borderline HOF candidate (though he probably doesn’t pass the old-school “sniff” test and falls off the HOF ballot after his first year because although he ranks 51st all-time in times on base, far too many of his times on base came via walk and not via base hit). I forget who said it, but if he does somehow make the Hall, he should be the first person whose plaque doesn’t actually touch the wall — put it on a stand about six feet away from it. Along those same lines, I’ll never forget the time a co-worker, who was a

Yankees fan, telling me a few months into the 2007 season that his son asked him about Abreu, “Dad, why is he so afraid of the wall?” Second, if you had asked me back in 2002 when Topps issued this triple-relic card which of the three men pictured on it I thought would be entering the 2014 preseason looking to hang on with the Phils, Abreu would’ve been my last pick. Just goes to show what an unpredictable game baseball really is. 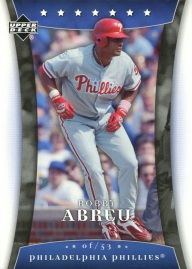 Set Type: Primary
Card dimensions: 2½” x 3½”
Additional Information/14,000 Phillies Commentary: Other than a perfunctory entry in SCD’s Standard Catalog of Baseball Cards listing a complete checklist, I am unable to find any information regarding this set. Ostensibly, it was distributed with Frito Lay products, but other than the fact that the set recycles the 2005 Upper Deck Trilo3y design, there’s literally no other information I can gather.

I didn’t even know about this set until a month or so ago when I encountered the Abreu card when running through one of my many eBay searches. It still amazes me just how often I am still just discovering oddball products years after they were released. 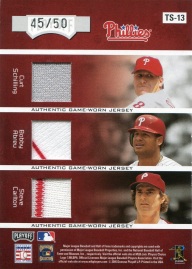 Set Type: Insert
Card Dimensions: 2½” x 3½”
Parallels: Spectrum, Prime Black.
Additional Information: Cards were inserted in packs of 2005 Playoff Absolute Memorabilia. The cards are essentially the same ones used in the 2005 Playoff Absolute Memorabilia Team Six insert set, only with relic swatches inserted for each of the players on the card. The backs of all the base Team Six Swatch Singles cards and their parallels bear a serial number. In order to succinctly provide accurate information for each card, the checklist below is formatted differently than the type typically used on 14,000 Phillies. 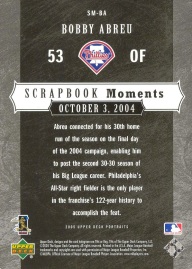 Set Type: Insert
Card dimensions: 1½” x 2⅝”
Manufacturer: Pacific
Additional Information: Seeded in packs of 2000 Private Stock, and is one of two different mini insert sets included with the Private Stock. This set was referred to as “Action” by the marketing material, but does not include the word anywhere on the cards. 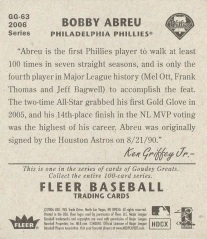 Set Type: Insert
Card dimensions: 2½” x 2⅞”
Manufacturer: Upper Deck
Parallels: Black, Cyan, Magenta & Yellow Printing Plates — each serial numbered “1/1”
Additional Information: Inserted in packs of 2006 Fleer Tradition. As the set name states, the design replicates that used by the 1934 Goudey set. However, the “Goudey Greats” banner and team logo at the top of the front of the card were additions by Upper Deck.

Set Type: Insert
Card dimensions: 2½” x 3½”
Additional Information/14,000 Phillies Commentary: Inserted in packs of 2002 Fleer Genuine. A rather large percentage of insert sets are ridiculous in nature, but even by insert set standards this one is pretty stupid. This is basically the non-memorabilia version of an insert card containing a piece of a game-used base. The game-used version doesn’t look much better than this version, but at least the base-piece justifies the card design. Without the relic, it just looks silly and ugly.

Earlier this week, while I was returning various cards I recently scanned to their locations in my storage boxes, I stumbled across the 2003 Fleer MLB Hot Prospects, and was pleasantly surprised to rediscover something that Fleer did with the Phillies in that set: 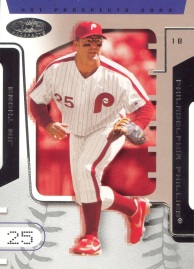 Earlier in 2003, the Phillies opened their final season at The Vet wearing replicas of their 1971 uniforms, and Fleer exclusively used photos from that game for the base cards and the sole insert that didn’t bear an autograph or memorabilia swatches. During this time, unfortunately, small sets containing just a few players from each team was far more common than they are now. In fact, a quick scan of my 2003 checklists shows approximately 30 different sets containing five or fewer Phillies cards. It’s a shame that MLB Hot Prospects was one of them — I would’ve loved to see a larger 2003 team set showing nothing but photos of Phils wearing the ’71 unis. While the number of the days of so many ridiculously small sets are thankfully gone, I find disconcerting the relative lack, thus far, of cards issued by Topps picturing Phillies in throwback uniforms from either of the dates in 2011 where they wore them. As far as I’m concerned, it’s just another piece of evidence pointing to the fact that the MLB-sanctioned Topps monopoly is doing more harm than good for the hobby.

(By the way, I don’t think that any of us back in 2003 would have guessed that of the three players here, Thome would be the one playing with the Phils in 2012.)

Random Card of the Day #1

I’m moving in three days, and most of my collection is currently inaccessible for the time being. So, rather than writing a post tying a card into the Phillies’ most recent opponent or their new one today or some other topic I wish to write about, I’m just going to post a card that I like for a random reason. I’ll just start calling posts like this the Random Card of the Day, and I’ll likely fall back on this a lot more frequently during the off-season or whenever else I can’t come up with a reason to post a particular card.

So, here’s the first in the new line of posts: 1999 Topps Stadium Club #39, Bobby Abreu. Why this card? Well, take a good look at the Chicago Cub in the background. That would be former (and future) Phillie second baseman Mickey

Morandini forlornly gazing into the Phillies dugout and (I’m guessing) wondering how long it will be before he’ll be back in their clubhouse. Furthermore, look at the stat breakdowns on the back. Take that, full career statistical record! We don’t need you anymore. Final reason: check out the heat coming off the Astroturf at Veteran’s Stadium — it’s making it appear as though Abreu and Morandini are in a puddle of water. Oh, how I miss the massive amounts of heat that The Vet would harness on some of those hot summer days.

14,000 Phillies
Create a free website or blog at WordPress.com.