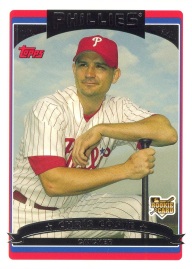 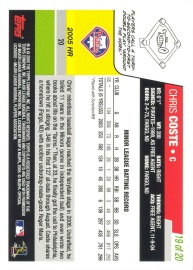 Set Type: Insert
Card dimensions: 2½” x 3½”
Additional Information: Cards were issued as a “bonus” in complete factory sets issued by Topps. Coste, the only Phillie in the set, was only available, along with all the other cards numbered 11-20, in the holiday factory sets. The photo of Coste used in this set was not used in any of the other sets that used the basic 2006 Topps design.

The Sad Joke That Is the “Rookie Card Logo” 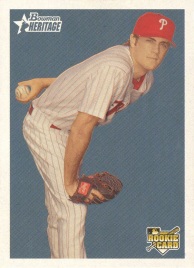 The centerpiece of these guidelines is a new “Rookie Card” logo which incorporates the MLB silhouetted batter logo. Under these new guidelines, licensees Topps and Upper Deck are allowed to produce Rookie Cards only after a player has been officially placed on a Club’s active 25-man roster. These new rules are designed to remove any uncertainty as to what constitutes a player’s Rookie Card, while the new distinctive logo will help fans and collectors easily identify an official “Rookie Card.”

Five years later, I think it’s safe to say that the new guidelines and Rookie Card Logo are an absolute and utterly abysmal failure. 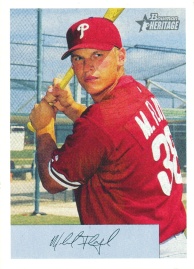 to remember that roughly 10 years ago, the industry-wide quest to produce the first Major League card of a player started spiraling out of control. In the overwhelming majority of sets, you could find players who would never appear in Spring Training game with the Major League club, let alone in an actual Major League game. For Phillies collectors, this meant oodles of cards featuring the likes of Mark Outlaw, Elio Serrano, Josue Perez, Josh Cisneros, Mark Outlaw and Michael Floyd (to be fair to the Phillies, they did draft him as a favor to his younger brother, Gavin, whom they made their #1 pick — at also allowed them to finally avoid the jinx of only employing the brother with lesser talent — but that doesn’t excuse Topps’s decision to put him on a Phillies card). The worst part was that these weren’t inserts — they were cards in the main set, and if you were a team 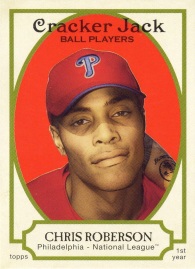 collector, you had to collect these cards as well. While I like the idea of rookie cards in the abstract, what I don’t want to see in my collection are cards of a bunch of players who never actually appeared in a game with the Phillies. When the new guidelines were announced, I held out quite a bit of hope that such madness would come to a grinding halt.

Unfortunately, the new guidelines and rules had a grandfathering period, which portended the failure of the Rookie Card Logo, even though it is still used today. That grandfathering period meant that players such as Cole Hamels received Rookie Card Logos on all of his 2006 cards, which meet those guidelines, even though he appeared on plenty of cards issued before 2006 that didn’t match them. I’m pretty 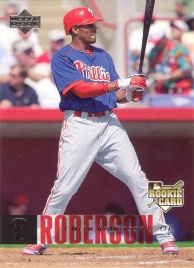 certain that to this day, most collectors still feel Hamels’s 2002 Bowman Draft Picks and Bowman Draft Picks Chrome cards are his rookie cards, despite the logos on 2006 cards. Chris Roberson, however, provided a more amusing example of the capriciousness of ignoring all previously issued rookie cards. On his 2005 Topps Cracker Jack card, Topps placed the words “topps 1st year” on the bottom of the card. I don’t know if this was in anticipation of the forthcoming guidelines and Rookie Card Logo, but it offers a peak at part of the strategy Topps would ultimately employ to work its way around the guidelines and render the new logo utterly meaningless — but more of that anon. Amazingly, despite the rookie mania that occurred over the previous few years, there were some players 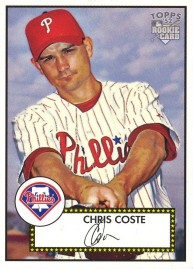 in 2006 who actually did receive rookie cards that accurately bore the Rookie Card Logo. The most notable (from the perspective of a Phillies collector) of these was Chris Coste. Amazingly, despite his long minor league career and the industry’s best efforts, he never appeared in a major league set before 2006.

Unfortunately, just as the overlap for players such as Roberson and Hamels began to wane and the Rookie Card Logo started developing some real meaning — although, it should be noted that as late as 2009 there were players receiving a Rookie Card Logo even though they had a card issued before 2006 — Topps figured out a workaround that resulted in the primary blow against allowing the logo to have any real meaning. They realized that the guidelines only applied to cards that appeared in the base/primary set, and by 2008 they started issuing cards of prospects as inserts to their Bowman brands (a logical step seeing as that’s where 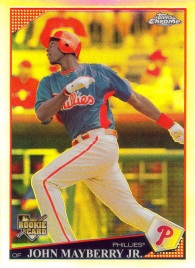 Topps historically overloaded its rookie offerings). Furthermore, Topps took the extra step of inserting the words “First Bowman Card” on all the first cards the prospects received. Suddenly, it was possible to purchase many different cards of players such as Carlos Monasterios, Chance Chapman, Matt Rizzotti and Anthony Hewitt.

Initially, I don’t think I cared all that much because Topps found a way to cater to the rather vocal rookie card collector segment of the hobby without upsetting the team collector contingent (which, truth be told, Topps hasn’t really given proper respect to us since… well… since it released the Topps Total sets). However, while this was keeping to the letter of the rookie card guidelines set by MLB and the MLBPA, it was also breaking the spirit of those guidelines. Despite what was intended with the Rookie Card Logo, Topps managed to muddy the waters once again as to what was a rookie card. There’s no better example of this than the mess it has made while issuing Domonic Brown cards. 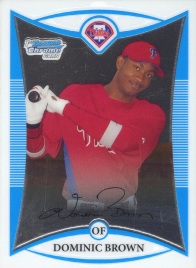 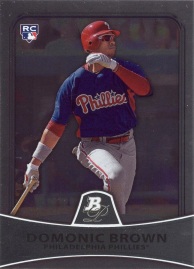 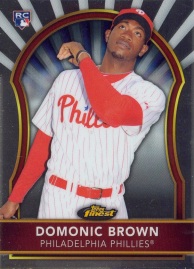 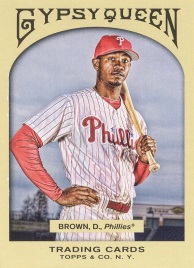 I posted these four cards in chronological order to highlight a very important point: his first card depicting him in a Phillies uniform and stating he is a member of the Phillies came out in 2008. Do you think it matters to hard core collectors that there isn’t a Rookie Card Logo? No. However, Phillies team collectors are now forced to decide whether or not to add that 2008 Bowman Chrome Brown card to their collections. What do you think their decision will be as whether it’s his rookie card or not? If most of them are like me, and I believe that is true, then the fact that I have that card should answer the question for you.

The moment Topps first did this, the MLBPA and MLB should have swiftly rebuked Topps by threatening to take away or restructure their license. Instead, they did nothing (or, if they did, they certainly didn’t make any noise publicly about it) and we’re now right back where we started. Actually, it’s worse than where we were in 2006. Take another look at those cards again, and you will notice that the 2010 Bowman Platinum and the 2011 Finest both carry a Rookie Card Logo. This shouldn’t happen. I don’t care what season is a player’s actual rookie season, the year his cards first carry the Rookie Card Logo should be the only year in which it is used. It would be one thing if this was an isolated incident, but it’s not. Take a look at the following two Vance Worley cards: 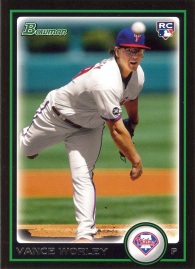 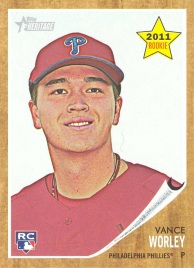 Topps issued the Bowman Draft Picks card last year, and the Topps Heritage card is from this season. Anyone want to try to logically explain how someone can have a rookie card — as it’s understood within the hobby — in two different years? We can at least take some small comfort in knowing that the 2010 card is actually his rookie card.

cannot even bother to get the Rookie Card Logo consistently applied in the same set. Brown’s regular Gypsy Queen card doesn’t bear a Rookie Card Logo, but the mini does. Was anybody at Topps actually comparing the mini parallels to the cards in the base set to check for consistency? I’ve written quite a bit over this past year about how Topps obviously doesn’t care about proper quality control, but this particular lack of attention to detail manages to further depress their already low standards.

Clearly, the Rookie Card Logo is an utter joke. The unofficially clearly-sanctioned runaround by Topps and the company’s inconsistency in applying it has destroyed any helpful meaning that MLB and the MLBPA tried to imbue into the Rookie Card Logo. Serious collectors ignore it (anyone care to argue that Michael Stutes’s 2011 Topps Update card is his rookie card and not his 2009 Bowman Chrome Prospects card or that Joe Savery or Justin De Fratus haven’t had an official rookie card yet) and casual collectors will very likely find themselves very annoyed when they discover the card bearing a Rookie Card 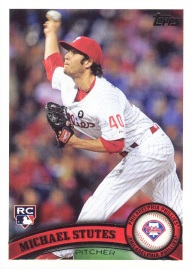 Logo is considered by very few to be an actual rookie card. It’s a meaningless construct. So long as MLB and the MLBPA continue to allow Topps to use it in the ridiculously capricious manner that it has demonstrated over the past few years, they are proving that they never really cared about addressing the problem the Rookie Card Logo was supposed to resolve. I, for one, wish it would go away, but like so many of the other problems not deeply ingrained into the hobby and industry, I just don’t see this issue getting resolved anytime soon.