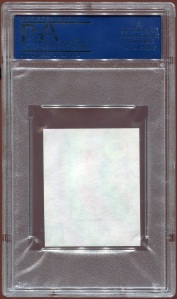 Set Type: Insert
Dimensions: Decal only, 1” x 1½”; Decal including the plain, white backing, 1¾” x 2⅛”
Additional Information: Inserted in packs of 1969 Topps. Although the Beckett online guide states that the decals “appear to be miniature versions of the Topps regular issue of that year,” the Dick Allen decal uses a different photo than his Topps card and the Chris Short decal crops the photo from his Topps card as more of a close-up. It is possible, however, that the decals in the majority of the remainder of the unnumbered set much more closely resemble their actual Topps cards.

According to the 2011 Standard Catalog of Baseball Cards (p. 428), a hoard consisting of two original 10,000-piece rolls was sold at auction in March 2001. Thus equated to 833 decals each for half the players in the set. Chris Short was among those who saw an increase in the number of decals now on the market. As a result of this find, Dick Allen’s decal is now marked as an SP.