The fact is that ever since the edict from MLB and the MLBPA banning the use of minor league prospects from base sets, the base Bowman set has basically become the 21st century equivalent of bubble gum packaged alongside insert prospect cards that for all practical purposes are rookie cards. I’m sorry, I just refuse to buy into the fiction that it’s not a rookie card if it’s an insert card. If that was the case, no one would care a whit about any of the Bryce Harper cards produced in 2011. But, since I avoid the prospect cards until the player actually reaches the majors (for example, I didn’t own Jon Pettibone’s 2011 Bowman Chrome Prospects insert card until about a week after his MLB debut), my thoughts will focus predominantly on the base set.

Bowman set was the first since 1995 to make use of white borders, and I’m happy to see that Topps chose to do so again this year. Dark and navy blue bordered cards have their place, but the long run of such borders really got monotonous. The plain white border also happen to work well with both the relatively simple frame and, by current Topps standards, the incredibly judicious use of foil (it would’ve been nice to do without foil on the player’s name and instead just show the name in plain white as well). The base set by itself is actually fairly attractive — in fact, I might even like it better than the design for the flagship Topps product. Unfortunately, that’s about the best thing I can say about this year’s base Bowman set.

Again, this is because Topps doesn’t really care all that much for the base set — it’s just a vehicle for the prospect inserts. Hell, they don’t even properly follow the slogan for the Bowman brand: “Home of the Rookie Card.” A week ago, I pointed out that eight different Phillies made 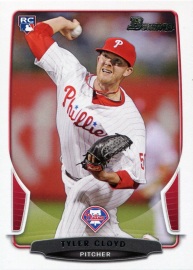 their MLB debut in 2012. Of those eight, only Jake Diekman was in a 2012 set, so that leaves six Phillies eligible for “official” rookie card status in 2013 (Tyson Brummett went to the Blue Jays during the off-season, thus is no longer a Phillie for this discussion). Prior to the release of 2013 Bowman, only Darin Ruf and Tyler Cloyd have received cards of their own — Steve Lerud shared his only card thus far with a prospect in the Mariners organization. That left three Phillies without a proper rookie card. Sadly, none of them have a card in 2013 Bowman, even though two of them, Freddy Galvis and Phillippe Aumont, were on the opening day roster. Yet, there’s Ruf and Cloyd again in the base set, and at the time the set went to the printer, neither of them had appeared in an MLB game in 2013. Nice job, “Home of the Rookie Card.”

So, who did we get instead? Well, 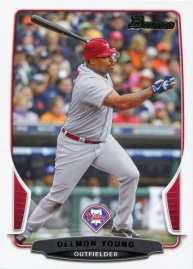 for starters we get the exact same crappy airbrush job on Delmon Young that we saw in 2013 Gypsy Queen. Topps had an extra few weeks to improve on it and couldn’t be bothered. I really would have rather had an “official” Freddy Galvis rookie card than a really crappy duplicate Delmon Young photo. Thank you, MLB, for continuing Topps’ monopoly and rewarding this bad behavior. Just as bad, Ruf’s card bears the same photo as the one on his 2013 Gypsy Queen Autograph card — a photo that was clearly taken a moment or two after the photo used on his 2013 Topps card. At least his Bowman Chrome Rookie Autograph card uses a new photo, though I’m certain that it’s not the last we’ll see of that photo either. Beyond that, it’s all the Phillies players you’d probably expect to see. Michael Young and Ben Revere both appear to have photos taken during Spring Training this year, but in both cases there’s a somewhat dark outline around the players that suggests to me that these potentially could be airbrush jobs as well.

As for the Prospects inserts, as I said before, I don’t typically track them down, but the two base inserts were included with the team set I ordered. It really does astound me that Topps goes out of their way to make Prospect insert cards for players such as Willians Astudillo, who spent 2012 in the Gulf Coast League and won’t be sniffing the air in a Major League stadium until sometime in 2017 at the absolute earliest, while simultaneously missing on players such as Ruf and Cloyd until after their MLB debuts. Interestingly, the “1st Bowman Card” text is not found on any of its Prospects cards this year. Nonetheless, every time I see a card of a player like Astudillo I can’t help but recall the plethora of Jorge Padilla and Josue Perez cards issued by Topps, Donruss and Fleer in 2002 and 2003. On one hand, we can be grateful that we no longer need to collect the likes of Astudillo for complete team sets, but I really do wish that Topps would make better use of its resources.

And that is how I will continue to feel about Bowman so long as Topps handles it this way. I don’t actually expect to see Topps make any changes to the flagship Bowman brand — they’ve been remarkably consistent about the set and its inserts since 2005. Yet, it could be better still. Imagine if a higher percentage of the Prospects actually possessed legitimate Major League talent; imagine if the base set included more rookie cards. Those things could happen, if Topps made better use of its resources.

Topps finally managed what I thought was impossible. With all the computer technology at their disposal, they released a Photoshop job on Delmon Young that was so awful that it brought to mind the horrible airbrush and drawn-in logos of the 1970s. Seriously, take a good look at Young’s helmet; is that the best job one of their in-house artists could do? Did they not have at least one photo of a Phillies hitter in a similar pose whose helmet could have been somewhat adequately cut-and-pasted? And then there’s the woeful attempt to add the red and white stripes at the bottom of the sleeve and down the side of the pants. I sincerely doubt the final job was compared side-by-side to a Phillie in a road uniform to check if it even looked passable. Was the deadline to complete this particular touch-up job so tight that the people at Topps just said to themselves, “Fuck it”? I’d really rather they just did nothing and issue the card with him as a member of the Tigers.