When I woke up this morning, I thought that maybe I should lay off the Topps bashing today. I have plenty of other post ideas that I would enjoy writing, so why not do one of those and then save the next round of Topps bashing for another day? Then, I got my hands on my first shipment of 2011 Topps Lineage 1975 Minis, and serendipity smacked me around like Mr. T. pitying the fool. Lesson I learned: never write a review without seeing the product.

See, I gushed about the 1975 Mini parallels without actually seeing both sides of the card. Based on the fronts alone, they looked pretty awesome. However, upon seeing the Utley, Hamels, Schmidt, Oswalt and Halladay cards I ordered off of eBay, my exuberance quickly vanished. The fronts were just as I hoped, the backs were just hideous miniatures of the regular card backs. Somewhere in the back of my head, I got the idea that they would do a full 1975 mock-up on these cards, complete with mini cartoons. No, it’s just on the front. Once again, Topps had done something totally half-assed.

The thing is that I should expect disappointment from Topps, because they so rarely actually take the time to do its job well. This has been going on for decades (dating back to reusing the same player picture from one year to the next over multiple sets and the crappy airbrush jobs), but like some demented Alzheimer’s patient, I keep thinking that the next effort from Topps will somehow show better effort in its next release. I have been doing this for most of my time as a collector, and here’s a more modern example of the type of laziness regularly displayed by Topps over the decades: 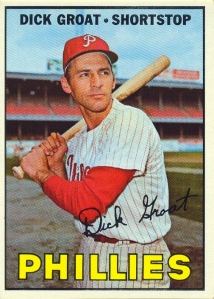 The first card is Dick Groat’s actual 1967 Topps card, and next to it is the 2001 Topps Archives version of the same card.  The Archives set was (for the most part) straightforward reprints of cards Topps issued during the previous 40 years. Unfortunately, Topps chose to recreate the cards rather crudely. As you can see, the fonts (especially the team name) on the fronts are wrong. It also appears that Topps changed the cropping on the picture (look closely at the knob of the bat on both cards). Furthermore, the the picture seems a bit darker on the Archives version. Topps gave Bob Uecker’s 1967 the same treatment, and all the same issues are repeated. Predictably, Topps was rather consistent with their error-making when it came to reproducing the back of the card: 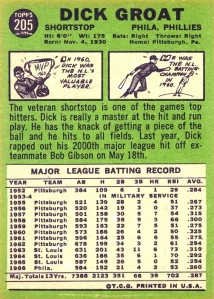 In addition to incorrectly cropped cartoons and wrong fonts, notice the line thicknesses and placement in the stats box and the incorrect spacing of “IN MILITARY SERVICE” and the line showing that he bats and throws right. What these scans don’t properly convey is just how hard it is to read the text on the Archives version. The wrong-colored cardboard darkens the green ink to the point where the black text is legible only under bright light. I understand that logistical concerns probably made it very difficult for Topps to use the appropriate cardboard stock for different cards in the set, but they still could have compensated for this issue. What I don’t understand is why they felt the need to recreate the cards. I realize that the archives set came out 10 years ago, but the technology was there to scan the copies from their archives and then use Photoshop to properly “remaster” (for lack of a better word) the cards before printing. Recreating the cards from scratch only works when you can duplicate the original in every way.

Now, I concede there’s an argument to be made for not making the cards look exactly right. One, you don’t want to devalue the originals by making the replicas look nearly identical, and, two, you want to ensure that no one easily confuses the reprint for the original. However, it seems to me that placing the gold foil Archives logo on the front ensures the difference is great enough to address both concerns.

Sadly, the Groat and Uecker cards were not exceptions in the 2001 Archives set. Most of the cards, the reprint of Dick Allen’s 1976 card is especially notable, display issues with incorrect font selection and photo recropping. Thankfully, more recent issues have shown that Topps can learn from their mistakes. Unfortunately, it just gives them plenty of room to make new ones, as evidenced by their work on Jim Bunning’s 1967 card, which I’ll tackle tomorrow.