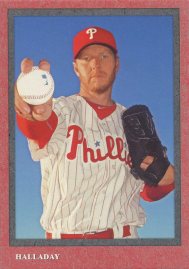 Over the weekend, I gave some more thought to what I wrote about the newest iteration of Topps’s Turkey Red brand. My opinion on the set remains the same, and I wouldn’t retract or change a single word. However, it did occur to me that if Topps was indeed attempting a modern take on the Turkey Red design — one of my suggestions for why the set looks the way it does — then they managed to completely overlook a direction suggested by their own designers approximately 15 years ago: the 1997 and 1998 Gallery sets.

When you look at those sets, it’s clear that they contain the same basic design elements employed by the original Turkey Red set. Both the ’97 and ’98 Gallery sets contain the picture frame and nameplate motifs, and both sets actually employ multiple variations of it in each year. Remove the foil and the gloss from 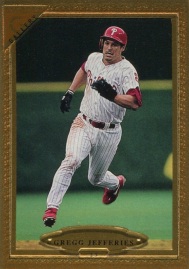 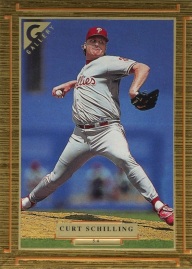 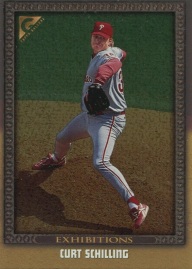 the cards, and you essentially have Turkey Red sets with frames embodying a much more modern appearance. Topps could have taken this direction, and even potentially created a “Gallery” parallel set that used foil, gloss, and the Gallery logo. While I typically avoid parallels and find most of them to be utterly banal and superfluous, I would’ve applauded Topps for updating a retro design and paying homage to a brand that they’ve let lay fallow for quite some time now (and I’m not just saying this because I came up with the idea.)

One other thought regarding the

2014 Turkey Red set: who the hell thought that new photo treatment looked attractive? I can accept that paying artists to do original artwork for baseball cards can become quite pricey and that it’s more cost effective to apply some kind of filter to an existing photo to make it appear like artwork — even though original artwork is what made the 2007 Turkey Red set arguably the best of the series. However, the new filter they used on this year’s set was just awful — even if they did manage to correct the error that caused coloration problems on the Phillie script on the jerseys and the “P” on the caps. Why the change from the one they used on all the other Turkey Red sets? If they felt such a change was essential, there were better filters available, such as the one they used on the 2007 Bowman Heritage sets.

Coming back to my primary complaint about the 2014 Turkey Red set, this boils back down to an overall lack of attention to detail at Topps. I know that once you take into account all its other sports and non-sports brands, Topps creates and distributes an ridiculous number of sets per year. That type of production schedule must be difficult to maintain, as evidenced by the fact that the release date on this year’s Heritage offering was pushed back to March 14 from March 5. Because Topps is a privately-held company and therefore isn’t required to publish annual earnings statements, there’s no way for me to know Topps’s profit margins for 2013. However, are their earnings so slim that they can’t hire one person — an expert on both the details of baseball card design throughout the product’s history and baseball history in general —

whose job it is to ensure that such inattention to detail doesn’t occur? Or is this a case of a company that actually doesn’t care all that much about what its customers think, so long as they somehow maintain their current profit margins?

In the end, I just wish that Topps showed that they care as much about the minutiae of the final product as collectors such as myself do. The key here is that we want to unabashedly love these sets — that’s why we purchase them and write about them in the manner we do. Out criticism stems not from a desire to berate the product but from the understanding that it could be made significantly more enjoyable without much in the way of effort. Deep down, however, I know that Topps will show no inclination to address these flaws so long as I, and collectors such as myself, continue to purchase such product  despite our complaints. However, I will continue to voice such objections in the hopes that one day Topps may actually start listening to them.

As I said in my last post, over two weeks ago, there are a number of reasons for my going into an unplanned hiatus on this site. None of them were bad reasons; it was just the type of thing that sometimes happens to someone who has multiple interests 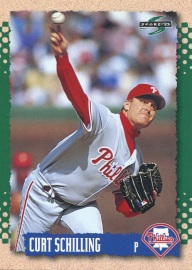 and related projects that are each capable of consuming weeks of spare time. In particular, a new project fell into my lap a few weeks ago: the sorting and cataloging of a 20,000+ card baseball card collection given to me by an old high school friend.

The work still isn’t finished, and it probably won’t be for at least another couple months. However, I am having lots of fun tearing through this particular project. The reason for this is that since the early ’90s, I have focused almost exclusively upon collecting Phillies cards. Going through this collection made me realize that I miss the effort and attention to detail it takes to properly collate a complete set. Furthermore, I have come to realize that by solely collecting Phillies cards — a decision I do not regret making, by the way — I  missed out on just seeing some of the ways in which other teams are presented on cards. Seeing how a particular design flows across an entire set, with varying border color schemes and different logos, can give you a slightly different appreciation for a particular design. A design might not work particularly well for the color schemes of one particular team, but seeing it across the entire set and all of Major League Baseball can sometimes give you a greater appreciation for a particular design.

Failing that, I’ve managed to see some really odd sights I never witnessed before: such as Mickey Morandini in a Blue Jays uniform, thanks to the 2001 Topps set. I swear, he looks absolutely miserable in the portrait on the back of the card.

More than anything, going 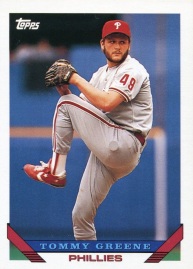 through these cards — which cover roughly 10 years starting in the early ’90s — has given me an even greater appreciation for cards that do not use foil. Looking over the 1999 UD Retro, 1993 Topps, 1992 Upper Deck and even the 1992 Triple Play (don’t laugh) just makes me realize just how unnecessary foil is. It was a wonderful marketing gimmick over 20 years ago, but now it’s just an obnoxious, unnecessary piece of flair that Topps somehow feels the need to include with each of its base sets. I would love nothing more than to see Topps put out a base set that looks more like it’s 1992 and 1993 offerings than the foil-encrusted sets they’ve been issuing ever since. (Although, the gloss and higher quality printing on the back is nice — Topps can keep doing that.)

Unfortunately, there are no complete sets in the collection. However, there are plenty of nearly complete sets in there. I haven’t made up my mind yet as to whether I will attempt to complete them. Even if I should choose to do so, I don’t think I will undertook the effort on all of them; there will definitely be an element of pick-and-choose

at play. Should I choose to do so, there are plenty of duplicates and I will be more than happy to become active in trading rather than spending the money on whichever sets I decide to complete.

In the meantime, additions to the Phillies Online Database will resume tomorrow. The one bad thing about this hiatus is that I am now really behind on listing the newest sets, and it will likely take me a few weeks just to catch up on all the cards that have come out in the past month. However, I will continue mixing things up, as I always have — I might even follow through with my plans to take requests. If you have a Phillies checklist you’d like to see posted, please leave a comment on this post stating which set it is, and I will make a special effort to include it in the coming weeks.

Set Type: Primary
Card dimensions: 2½” x 3½”
Additional Information: This unnumbered set represents Donruss’s attempt at creating a collectible series of cards similar to fantasy-based card games such as Magic: The Gathering. The backs of all the cards are identical. In addition, Donruss printed the cards in varying quantities: common, uncommon, and rare. Accordingly, each card in the checklist below is followed by a “C,” “U,” or “R.” The numbering system below is the one employed by both Beckett and SCD, who list the cards in alphabetical order within team and league.

Set Type: Insert
Card Dimensions: 2½” x 3½”
Parallel: Vintage ’63 Classic, serial #ed print run 63
Additional Information: Seeded in packs of 1998 Fleer Tradition, the set recycles the 1963 Fleer design. Although the photos are identical to the player’s cards from the primary 1998 Fleer Tradition set, this set is designated as an insert set due to its completely different design and the fact that Fleer printed a parallel of it. SCD refers to this set as “1998 Fleer Vintage ’63.”