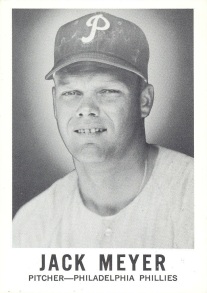 Strictly from the perspective of being a Phillies card collector, the 2003-2008 period was something of a dark period for me. In addition to needing to cut back drastically on my purchases of new material, I also had to sell large swaths of my pre-1970 collection (the ’60s remained mostly intact, with very notable exceptions) in order to make ends meet. It’s something I will likely write about in more detail at some indeterminate point in the future, but for now it’s enough to say that rebuilding that part of my collection is a major goal — one I’m not certain I’ll ever accomplish. It took years for me to build that part of the collection the first time around, and I have to keep reminding myself that rebuilding it will likely take just as much time (if not longer) on the second try.

My complete 1960 Leaf team set was a major casualty of that sell-off. However, with the exception of one particular hi-number card — I’m fairly certain that any knowledgeable collector knows exactly which one I’m referring to — it should be one of the easier parts of the collection to rebuild. The Jack Meyer card shown here is one of the recent re-acquisitions. I haven’t set any sort of date as a goal for piecing together a new complete team set — the fact is that there is a lot of older team sets I’m reassembling as I can afford the cards — but the fact that I’m now down to needing just four cards on this set feels like an accomplishment.