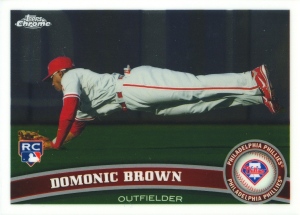 It’s fitting that 2011 Topps Chrome landed in stores and hobby shops last week, given that I planned to make the Chrome brand the next subject in my series of posts about parallel cards. Fittingly, this year’s set brought the introduction of Sepia Refractors, with a serial numbered print run of just 99. Can you feel the excitement! (I really do wish there was a way to properly convey the tone and level of sarcasm placed in that statement.) I guess Topps became bored with just the eight different types of refractors from last year’s set (not to mention the four printing plate 1/1 parallels for each card) and needed to spice things up by horribly muting the colors underneath the ultra-high gloss sheen. My guess is that in a few weeks you can probably get the new Sepia Refractors off of eBay for the price as myriad of other refractors available for the set.

The fact that Topps turned the Chrome series into an expensive vehicle for endless parallels provides ample reason to drive team collectors mad, but what makes it worse is that the set is already a parallel set. Starting with the first release of Topps Chrome in 1996, Topps made it very clear that the cards were just very shiny versions of select cards in their regular set. Yes, it was marketed individually and the cards carried different numbers, but for all practical purposes they are parallels — there is no difference in the design or photos in the cards. If that’s all Topps did with the Chrome brand, then for my purposes as a collector, I could’ve easily disregarded and never paid really attention to it.

Alas, Topps couldn’t manage that either. In 2000, Topps released its first and only Stadium Club Chrome set. Just like the preceding regular Chrome sets, it was essentially a parallel set. However, for the first time ever, Topps took the time to update the set to reflect off-season transactions. From the standpoint of a Phillies collector, this meant that Mickey Morandini and Alan Ashby were depicted as Phillies in this set, after appearing respectively with the Cubs and Padres in the regular Stadium Club issue. This unprecedented update caught me off guard, and it wasn’t actually until a couple years later that I finally found out this occurred. Oddly, even though the Chrome sets are issued far enough into the season to make these changes, Topps never made them before, and never (at least, to the best of my knowledge and in regards to the Phillies) made them again.

I’d like to report that this was an isolated 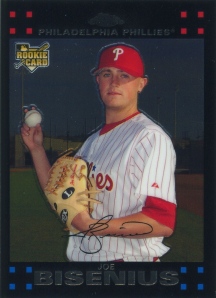 incident. Sadly, no. In 2007 Topps once again monkeyed with the Chrome set without much warning. That year, they included J.D. Durbin and Joe Bisenius in the Chrome set, even though they hadn’t appeared in the regular issue set (the rest of the Phillies cards in the Chrome issue were just Chrome versions of their regular cards, as per established Topps procedure). However, the Update set hadn’t come out yet, so it was possible that their cards were just previews of what their Update cards would look like. Well the Update set used a different photo for the Durbin card and Bisenius didn’t appear at all. Now, I understand that Topps needs to cultivate ways to maintain interest in their various brands, but by 2007, they had long established what Chrome was, and monkeying it in this fashion only caused undue confusion as to what to expect. 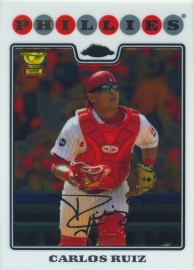 As if they sensed this, the next year Topps decided to use different photos on all the Chrome cards (at least, that was the case with the Phillies cards in the set). However, in typical Topps fashion, they did it in a half-assed manner and frequently used a photo in the same sequence from which Topps chose for the regular Topps set — the Myers, Rollins and Ruiz cards were all blatant examples of this. If you’re going to use different photos for the entire set, at least use markedly different ones.

The following year, Topps inexplicably reverted to reissuing the exact same photos from the base set. However, a concept they started with their 2005 Topps Chrome set finally arrived for Phillies collectors: certified autograph cards of rookies that had not appeared in the regular Topps set. Because I like to collect at least one certified autograph issue for each Phillie who receives one, the fact that Sergio Escalona had such a card in the 2009 Topps Chrome issue was a welcome thing (it is his only Phillies certified autograph issue). However, once again proving that Topps doesn’t want to ever make life easy for team collectors, they 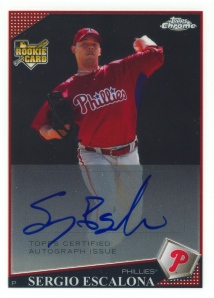 repeated what they did with Bisenius the year before, and did not put an Escalona card in the Update set. Now, I understand that everyone cannot appear in the flagship Topps issue — there are just too many players over the course of a major league season to include them all. However — and I now I’m repeating myself again — by now Topps has long established that the Chrome sets are essentially parallels, and by engaging in tricks like this with Escalona and Bisenius, they are ultimately annoying collectors such as myself.

(Quick note: after writing the previous paragraph, but before completing this post, it came to my attention the Scott Mathieson received the Escalona treatment in 2005. It took me six years to figure this one out, thus further establishing my point about how Topps’s inconsistency with the Chrome brand is only serving to sow confusion.)

The collective parallel assault built even further with the 2010 Topps Chrome issue. No longer content with just creating Chrome versions of the main Topps set, Topps started including as inserts Chrome versions and refractors of cards from its other sets. Suddenly, there were Chrome versions of cards from Topps National Chicle and Topps 206 — sets that were not marketed with or packaged with chrome parallels. Admittedly, I don’t feel the need to get Chrome versions of those cards. However, it does cloud the lines between the sets and probably makes it difficult for future collectors to find information on these cards when they acquire them. I can imagine a future, relatively new collector finding a 2010 Topps Chrome National Chicle Cole Hamels card and wondering why it isn’t listed in the catalog with the rest of the National Chicle cards. Topps compounded the potential confusion this year by including in the 2011 Chrome set previously unreleased parallels of cards from its Heritage brand — a brand that already contains chrome parallels. Just trying to properly put that into words almost makes me dizzy.

Topps’s Chrome issues illustrate a big reason why collecting has lost some of its fun value for me over the years. They are spending inordinate amount of resources printing sets that are essentially 99% the same cards in the regular Topps set. But, if you want to collect just one of each unique card, you still have to pay attention to the Chrome sets just to make sure you’re not missing out on the 1% of the sets that contains cards of players that don’t appear in the regular Topps issue. The chase is only fun when it’s made clear to you what it is you are chasing. Topps does a crappy job of that. MLB supposedly now possesses the right to curtail this behavior — which I feel is predominantly a detriment to the hobby. However, I doubt that will happen. Topps wouldn’t continue with the ridiculous number of parallels if they weren’t making money as a result of it. Sadly, Topps’s greed in this matter doesn’t stop with the Chrome series. My final segment on the parallel madness will appear by the end of the week.