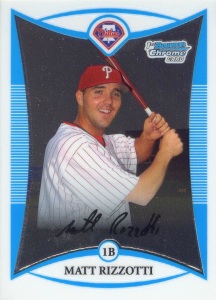 will be the Phillies solution to their first base problem while Ryan Howard recovers from his injury. Given the numbers he put up during his limited playing time this year, having him temporarily man the position certainly makes sense. Nonetheless, given that he’s ready for promotion following two good seasons in Reading, I can’t help but root for giving Matt Rizzotti a real chance to step in. On the other hand, he has no real future in the organization and his value won’t get any higher. As much as I enjoy seeing players developed from within the organization stick around and contributing, it makes for more sense for the Phillies to use him a trade bait to address other needs for the 2012 season.

2011 isn’t over yet, but Topps has announced release dates and preliminary checklists for its remaining issues this year. Based on the information available, it appears that Topps will not issue a single Antonio Bastardo card this year. I understand that the current economics of baseball card manufacturing mean that many players won’t appear on a card in a given year, but the fact that Bastardo held a position of such importance in the bullpen this year should have at least warranted him a spot in the Update Series set. My only guess as to why he didn’t get one is that Michael Stutes, who did receive a card, hasn’t had an official (that is, one bearing the MLBPA-approved logo) rookie card yet, while Bastardo received a few back in

2009. Nonetheless, it really would have been nice to see him on something other than a team-issued card. I can’t help but wonder if Upper Deck or some other manufacturer, had they possessed a license to produce cards, would have found a way to include him in a set.

Because it’s still only October, it feels too early to do a baseball cards year-in-review post. However, given that the remaining sets are a couple prospect-driven Bowman products, I may end up writing the post much sooner than later.