I have no idea what type of broadcaster he’s going to be, but I can’t help but recall that he provided he single greatest quote from a Phillie in a post-game interview: “When you get that nice celebration coming into the dugout, and you’re getting your ass hammered by guys, there’s no better feeling than to have that done.” A man who can speak that eloquently certainly has a great shot at becoming an awesome color commentator, and I look forward to hearing his commentary during Phillies broadcasts. Not that I needed the excuse, but I feel as though this justifies my putting my Stairs jersey to lots of good use this coming season. It must also be noted that his new gig makes it a lot easier for him to cash-in on those free beers for life.

And, welcome back to Jamie Moyer as well, who now gets to be an announcer for the team he grew up cheering for, in addition to winning a World Series with them.

In Case of Emergency, Use Stairs 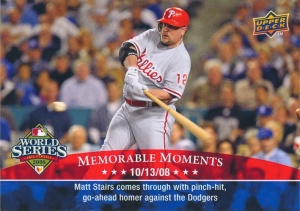 Last night, when going through the various websites tracking MLB trade rumors, I sadly discovered that the Washington Nationals have designated Matt Stairs for assignment — the first step in releasing him. Given his age (43) and slash line on the year (.154/.257/.169, good for a 22 OPS+ — ouch!), it’s probably safe to see that his career is over. I think it’s also safe to say that after 19 seasons playing for 12 different teams (three in 2006 alone), without doubt his career-defining moment came on October 13, 2008 when he hit an epic home run off of Jonathan Broxton in Game 4 of the NLCS, thus completing a come-from-behind victory and forever becoming a part of Phillies lore. If that wasn’t enough, in a post-game interview, he gave one of the all-time best, unintentionally riotous homo-erotic statements of all-time: “When you get that nice celebration coming into the dugout, and you’re getting your ass hammered by guys, there’s no better feeling than to have that done.”

True story: just second before he hit that home run, I finished explaining Matt Stair’s role on the Phillies to the woman I was dating at the time as follows: “He’s the ultimate all-or-nothing pinch hitter. He’s either going to strike out and look really bad, or he’s going to hit the ball so hard that it will show up on radar at LAX.” He then proceeded hit Broxton’s fastball so freaking hard that it looked for a moment like it would actually leave Dodger Stadium. When selecting the Phillie whose number and number I would get on my jersey with the 2008 World Series patch, I very nearly ordered it with Stairs’s name and number. However, I decided to go with Joe Blanton because he became the first pitcher in over 30 years to hit a home run during the World Series. In retrospect, I feel like I might have chosen poorly. Then again, I never did get a 2009 jersey, and there are still plenty of those available with Stairs’s name on eBay.

In addition to the home run in the ’08 NLCS, he hit one other memorable shot: a two-run homer in Colorado in the top of the 9th that completed another come-from-behind victory on April 12, 2009. Unbeknownst at the time, it would be the last game that Harry Kalas covered — without realizing it, Stairs ensured that Kalas’s last game was a happy occasion for all. Although he only played for the Phillies for a little over one season, there are few in the franchise’s history that made the lasting impact that he did. So, unless some team comes out of nowhere to sign him to play the remainder of the season, it’s farewell to Matt Stairs — one of the most unlikely heroes in Phillies history.