2011 Phillies Cards in Review: Rookie Card of the Year

If we follow the guidelines established by MLB and the MLBPA, then just considering the cards bearing the Rookie Card Logo should greatly streamline the nomination process. The fact that the 2011 Phillies were a heavily veteran-dominated team greatly simplifies the search. In fact, just four Phillies received a card bearing the RC Logo this year: Domonic Brown, Vance Worley, Michael Martínez and Michael Stutes. To be nice to all our nominees, we’re going to overlook any of their cards issued prior to 2011 that neither display the RC Logo nor follow the Rookie Card guidelines

Unfortunately for Brown and Worley, however, I’m disqualifying them because Topps issued both of them cards bearing the RC Logo in their 2010 sets. I’m sorry, but you cannot have rookie

cards in two consecutive years. This leaves just Martínez and Stutes, each of whom received just two cards from Topps. However, in an effort to expand the pool of available entries, we will accept for consideration their cards in the Phillies Team Issue Sets, even though those cards don’t bear the RC Logo. I’m not sure why the Phillies don’t use the logo in their sets, but to be fair, it took me five years to realize this wasn’t happening. It’s very likely that it hasn’t occurred to anyone in the organization either.

So, with such a small field, picking a winner for this category should be relatively easy, and that’s why I announce with a very clear conscience and no reservations that the winner of the 2011 Phillies Rookie Card of the Year goes to…

Even before the creation of the RC Logo, there weren’t many players who could state that their only rookie card was also an autograph card, but De Fratus can make that claim. I know, it doesn’t bear the RC Logo and shouldn’t be under consideration. But I get to make the rules (it is my blog), and I hereby state that his selection accompanies the creation of the De Fratus Exemption — to be used transparently should I ever again write a best of the year series for baseball cards. While the general guideline is that I will refuse to acknowledge rookie cards not bearing the appropriate logo, exceptions will be made for any player whose first card depicting him as a Philadelphia Phillie actually happens to coincide with his first season appearing in a Major League game — regardless of whether the card bears the RC Logo.

I’ll clarify by way of example. Despite having received a couple cards already, Joe Savery still maintains eligibility for the 2012 awards for two reasons: 1) he did not receive a card this year (if he had, he would have been eligible for this year’s awards); and 2) none of his previous cards to date bear the RC Logo. Conversely, if De Fratus had not appeared in a couple games with the Phillies this year, this card would have gone down the memory hole along with the likes of Jiwan James and Austin Hyatt. I hope that clarifies the De Fratus Exemption, but if it doesn’t, then there’s nothing like having a bunch of confusing legalese to muddle and mystify the process!

Next awards (tomorrow or Thursday): Parallel Card and Parallel Series of the Year

I stayed up until the conclusion of the Yankees-Rays last night and just soaked up what was the greatest night of regular season baseball in my lifetime. As I type this, I still cannot believe everything that I saw last night. I don’t know if I will actually write all my thoughts about last night’s games into this post, but I will certainly give it my best shot.

1. Charlie Manuel’s Historic Night
Throughout the day yesterday, the press played up how a Phillies win would give Manuel the franchise record for most victories by a manager. I found this interesting because Baseball-Reference.com — which I used in my post about Manuel back in July, when I stated he needed 103 wins this season to set a new record — lists Gene Mauch as winning 646 games as Phillies manager, not 645 as reported by most in the mainstream press. I still haven’t seen an explanation for the discrepancy, so I’m not entirely convinced that Manuel has sole possession of the record just yet. Nonetheless, at a minimum he co-holds the mark, which means that Manuel now has the franchise marks for most wins, most wins in a season (breaking Danny Ozark’s mark of 101 from

1976 & 1977), highest winning percentage and most first place finishes. He is also the only manager to lead the Phillies to multiple World Series appearances. At this stage, the argument over who is the greatest Phillies manager ever is as settled as who is the greatest Phillies third baseman ever. (Quick aside: to this day, I still can’t figure out why Manuel’s card in the 2009 Topps Heritage set uses the 1960 Phillies logo while the rest of the Phillies card use the current logo.)

2. The Other Games
Although the ghost of the 1964 Phillies has long since been excised, their end-of-season performance that year still ranks as one of the greatest collapses in history. So, it seems fitting that a former Phillies manager, Terry Francona, was leading the Boston team that may very well be the worst collapse in history. Currently, there are a lot of rumors swirling about this collapse may ultimately cost Francona h 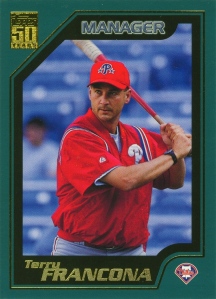 is job. However, it should be noted that Mauch stayed on with the Phillies into the 1968 season, and the Mets, for example, didn’t fire Willie Randolph after their collapse in 2007. On the other hand, the Red Sox were quick in firing Grady Little after their postseason collapse in 2003. Those are just examples off of the top of my head — it would be interesting to research all the team frequently mentioned in the lists of historic collapses to see how managers, on average, fair after such season-ending performances.

However, if it wasn’t for the Red Sox, everyone would be spending far more time discussing the Braves collapse, which for just a mere 25 minutes or so was the new mantle-bearer for worst choke in baseball history. I do not hide the fact that I absolutely disdain the Braves for no other reason than the Tomahawk Chop. Aside from being annoying,

it feels like it’s a cheap, artificial construct. I’ve never been to a game in Atlanta, but every time I see an Atlanta home gome on TV, it sounds like the chant is actually pumped through the stadium sound system. Of course, that’s insignificant compared to the fact that it’s disgustingly racist in a manner matched only by the Indians’ use of the Chief Wahoo logo. But, I digress. This was Fredi Gonzalez’s first year as Braves manager and the baseball culture in Atlanta is far different from that in Boston, so he will probably be back for next season. Having said that, how the hell do you pitch to Hunter Pence in that situation in the 13th inning when Michael Martinez is batting behind him? Seriously, how do you justify not issuing the intentional walk in order to pitch Martinez, who sports a .258 OBP and an OPS+ of just 48?

Still in disbelief over the Braves decision to pitch to Pence instead of pitching to Martinez. WTF?

As for that game in Tampa… just, wow. If that had been a Hollywood movie, I would have been yelling, “Bull shit!” at the screen the moment the Rays tie the game. That ending was so improbable that I still cannot believe that happened. Seriously, the only thing that competes with this is the mind-numbingly difficult-to-comprehend decision to pitch to Pence instead of walking him to get to Martinez. However, I would like to point out that while Citizen’s Bank Park is often derided for being a bandbox, at least the corners of the field are fair. In most parks in baseball, both the game-tying and the game-winning home runs in the Rays game last night would have stayed in the park — the corners in Tropicana Field are 315 and 322 feet, and both home runs were line drives that just barely sailed over the fence. In a park with normal corners, the Yankees might have actually won that game.

At the end of the night, I was admittedly just a bit disappointed that there wouldn’t be any sudden-death playoff games today. However, the excitement and drama from what unfolded in Atlanta, Baltimore and Tampa more than compensated for that. Here’s to hoping that this year’s playoffs are just as exciting as the end of the regular season (and that the Phillies win it all, of course).