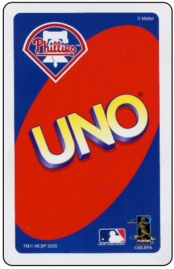 While I try to collect as many different Phillies cards as possible, the fact is that there’s a lot of material out there that you can easily miss because it doesn’t pass through the typical hobby circles. Because of this, I try my best to monitor what’s happening in the toy world in regards to games licensed by both the MLBPA and MLB. I think I’ve done a decent job of this over the years, so I thought that this week it would be fun to highlight a few items that less hardcore Phillies collectors might have missed. In the case of one particular set that I’ll be featuring at the end of the week, it’s a Phillies card I only very recently discovered and actually isn’t the version of the Phillies Baseball Card Database that’s currently online (it will appear in the next version).

One of my favorite of such 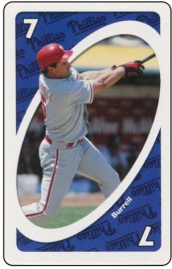 oddball items are the sporadic Uno baseball sets issued by Hasbro over the past 10 years. To my knowledge, there have only been three Uno sets containing Phillies. Two of them were completely Phillies-themed and issued inside customized tins to hold the cards: a 2005 set that Hasbro co-produced with Sababa Toys and a 2010 set co-produced with Fundex Games. Interestingly, though the sets are just five years apart, Jimmy Rollins is the only player to appear in both sets. The other Uno set to feature a Phillie was another 2005 set (some eBay sellers list it as a 2006 set), also co-produced with Sababa, that featured at least one member of every National League team; Pat Burrell was the sole member of the Phillies included in the set. Across all three sets, the same player appears on the same type of card, regardless of color. So, for example, Pat Burrell appears on the #7 card for red, blue, yellow and green, in the 2005 Uno National League set. 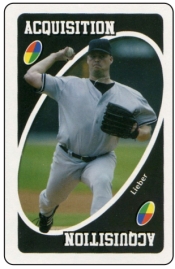 The really fascinating thing about such specialty-themed Uno sets is that they occasionally (not always) have cards unique to that version of Uno and that those cards even come with their own rules. In the case of the 2005 Uno Phillies set, that special card is an “Acquisition” card. Appropriately, the card features Jon Lieber in a Yankees uniform, with all Yankee insignia airbrushed away. Without getting into the supporting details, a player who draws this card has the “ability to make major moves and acquire a card that can improve his/her hand.” I never actually played a game with this particular deck of Uno cards, so I don’t know how much impact such a card actually has on a game, but the inclusion of such a “transaction” card was certainly a thoughtful attempt to customize the game play for baseball purposes. Sadly, the 2010 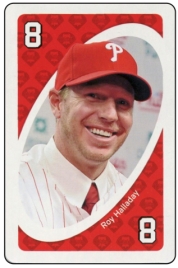 edition of the Phillies set (which is still available on Amazon, by the way) includes no such specialty cards and follows standard Uno rules, which is a shame because such a card could’ve been used for Roy Halladay, who appears on all the “8” cards in the set and whose picture clearly comes from the press conference where the Phillies announced his acquisition. Using an “Acquisition” card for Halladay would’ve allowed for the inclusion of another Phillie, notably Jamie Moyer or Joe Blanton.

Who knows when, or even if, the next Phillies-themed Uno set will appear. I’m not actually counting on the appearance of one, but I will certainly continue to sporadically search online toy and game vendors for “Uno Phillies” for the forseeable future.

I still don’t know what to make of yesterday’s signing of Bobby Abreu to a minor league contract. The Phillies need to get younger, not older, and while Abreu has to earn the spot, I’d hate to think that this means less time for Darin Ruf, who despite the holes in his game, is a perfectly serviceable bat off the bench and fourth outfielder. On the other hand, if Abreu makes the team, the Phillies will enter the 2014 season with ⅔ of its starting lineup from 2003 — how many other teams can say that? (Snarky aside: how many other teams would be glad to say that?) In addition, it’s very hard for me to root against any player in his 40s trying to hang on to the game as long as possible.

Two other thoughts come to mind about Abreu. First, he truly is a borderline HOF candidate (though he probably doesn’t pass the old-school “sniff” test and falls off the HOF ballot after his first year because although he ranks 51st all-time in times on base, far too many of his times on base came via walk and not via base hit). I forget who said it, but if he does somehow make the Hall, he should be the first person whose plaque doesn’t actually touch the wall — put it on a stand about six feet away from it. Along those same lines, I’ll never forget the time a co-worker, who was a 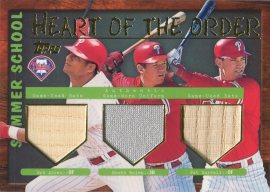 Yankees fan, telling me a few months into the 2007 season that his son asked him about Abreu, “Dad, why is he so afraid of the wall?” Second, if you had asked me back in 2002 when Topps issued this triple-relic card which of the three men pictured on it I thought would be entering the 2014 preseason looking to hang on with the Phils, Abreu would’ve been my last pick. Just goes to show what an unpredictable game baseball really is. 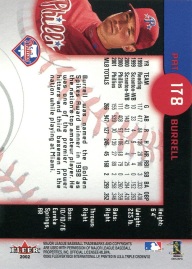 Set Type: Primary
Card dimensions: 2½” x 3½”
Partial Parallels: Batting Average; Home Run; RBI. All parallels are serial numbered on the back and print runs vary by player. Batting Average parallels feature green foil, Home Run parallels feature red foil, and the RBI parallels feature blue foil. More about parallels in the Additional Information/14,000 Phillies Commentary section.
Inserts: None. Set has inserts, but no Phillies appear in any of them.
Additional Information/14,000 Phillies Commentary: By the time this set was released, varying the print runs for the parallels had been going on for some time. However, at least in the case of this set, the choice of print runs actually made sense given the name of the set: the print run for each of the player’s parallels is based on his correlating Triple Crown stat for 2001. In the checklist below, these three stats/print runs are listed in the traditional slash line fashion in parenthesis following the player’s name.

However, these were partial parallels, so not all the players in the set received parallels — nor is there any obvious reason why certain cards did not receive the parallel treatment. Lieberthal is the only Phillie not issued any parallel cards. 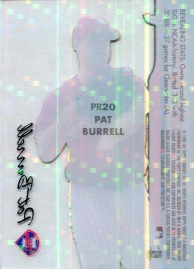 Set Type: Insert
Card dimensions: 2½” x 3½”
Parallels: Hyperplaid, Stadium Stars
Manufacturer: Topps
Additional Information: Seeded in packs of 1999 Finest. An opaque version of the protective coating Topps applied to the front of the Finest cards was applied to both the front and the back of these cards, thus forcing the collector to peel both sides in order to determine whom the card depicted. The base inserts were considered “common,” the Hyperplaid were considered “uncommon,” and the Stadium Stars “rare.” 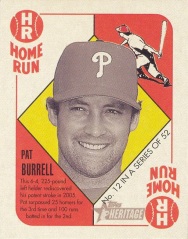 Set Type: Insert
Card Dimensions: 21⁄16” x 2⅝”
Manufacturer: Topps
Additional Information/14,000 Phillies Commentary: Inserted in packs of 2005 Bowman Heritage. On one hand, I see the connection that inspired Topps’s decision to include this insert with the 2005 Bowman Heritage set, which was based off of the 1951 Bowman design. However, I’m not fond of this type of crossover product; cards recycling Topps designs belong in Topps packs and cards recycling Bowman designs belong in Bowman products — let DC and Marvel handle all the crossover duties. On the other hand, I like the cards a lot because they are actually the same size as the original 1951 Topps cards — unlike previous Topps issues that recycled the design, such as the 2003 Topps Red Backs and 2003 Topps Blue Backs inserts. If Topps had used a thicker, white cardboard stock and properly rounded the corners, the cards would have been perfect. 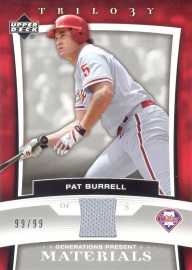 Card Dimensions: 2½” x 3½”
Parallel: Gold, serial #ed to 25.
Additional Information: Seeded in packs of 2005 Upper Deck Trilo3y. All cards bear jersey swatches. Base cards are serial #ed to 99, and all base cards and parallels bear the serial number on the front of the card. Even though Upper Deck clearly replaces the “g” in Trilogy with a “3,” both Beckett and SCD spell the name all of Trilo3y sets with the “g” instead. 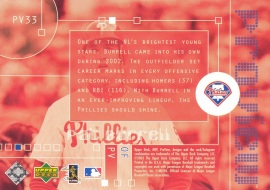 Set Type: Insert
Card dimensions: 2½” x 3½”
Parallel: Gold
Additional Information: According to Beckett, cards were inserted in boxes of 2003 Upper Deck MVP as a two-card box topper pack. Both Beckett and SCD refer to the set as “2003 Upper Deck MVP Pro View.” Beckett’s checklist incorrectly lists Thome as an Indian, but he is depicted as a Phillie on the card and is appropriately designated as one on the card.

Set Type: Primary
Card dimensions: 2½” x 3½”
Insert: Team Logo Stickers
Additional Information: As is usually the case with the Topps Opening Day sets over the years, the color of the border and the huge Opening Day foil logo are the only notable differences between these cards and the regular Topps issue.

Set Type: Insert
Card dimensions: 2½” x 3½”
Parallel: Blue Ink, serial numbered by hand on the front of the card to 50.
Additional Information: These unnumbered autograph cards were seeded in packs of 1999 Skybox Premium. Signed in black ink and embossed with a SkyBox Seal of Authenticity stamp, the cards were seeded 1:68 packs. The numbering assignment in the checklist below derives from Beckett. 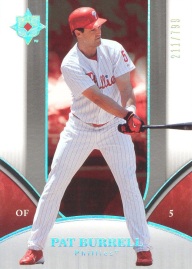 Over this past weekend, I received an order I made from CheckOutMyCards.com. There was no one card in the order that was all that special — nearly everything was material from 2004-2008. However, it did contain what became card number 15,500 in my collection. Based solely on the order of how I entered the additions into my spreadsheets, the Pat Burrell card featured here become that number. These additions result in the fact that I have added in less than 11 months over 1,500 cards to the collection. This truly has been only made possible by the fact that I collected so little (comparatively speaking) during the aforementioned four-year period. Unless I find myself needing to to heavily curtail my collecting for a multi-year

period once more, I truly doubt my collection will ever expand at this rate again.

I’m roughly six weeks away from the first anniversary of the start of this blog. When I made my initial post, I was at 13,993 cards at the time (hence the name of this blog). I have updated the number at the top of the blog to show the collection’s exact count as of this morning. It will be interesting to see what the count will be when May 4, 2012 arrives.

14,000 Phillies
Create a free website or blog at WordPress.com.