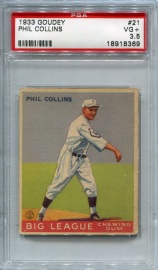 Of course, I decided that this moment called for Collins’s third appearance on 14,000 Phillies. Amazingly, my well hasn’t run dry yet — I have two other Collins cards should I ever feel the need to make make another Genesis reference. I also have a couple Matt Smiths set aside for the coming 50th anniversary of Doctor Who. 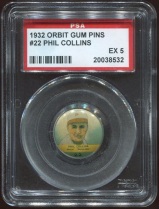 Set Type: Primary
Pin Diameter: Approximately ¾”
Additional Information: Beckett’s Online Guide states that the pins comprising this set “were thought to have been issued some time between 1932 and 1934.” In addition, SCD’s 2011 Standard Catalog of Baseball Cards states that the pins were issued “circa 1932.” With the exception of the number on the bottom of the front 0f the pin, all the pins in this set are identical to the pins issued in the 1932 Orbit Gum Pins Unnumbered (PR3) set.

Regular (that is, what passes for “regular” on this site) resumes tomorrow.