I enjoy collecting — I wouldn’t be doing so and or writing about it if I didn’t enjoy it — but it’s safe to say that I don’t enjoy it the way I did when I was a teenager, or even a young adult. Part of it is the way the business end of the hobby asserted itself with an ugly adamancy, but even that is something I have adjusted to. The fact is that the business aspect of card collecting started weaving its death-grip on the hobby before I started collecting seriously (as opposed to the way children collected cards, before the advent of Beckett Monthly). For me, it’s always been there — it’s just now predominant in a way that I never would have imagined as a teen. No, for me the introduction of extremely limited product created the biggest collecting buzzkill over the past 20 years.

Looking back at my teens, I thoroughly enjoyed, but didn’t fully appreciate, the sense that I sometime could put together a fairly comprehensive collection of baseball cards. Admittedly, I didn’t possess much knowledge about pre-World War II cards, so it was a very false sense, but nonetheless I felt like that if I persevered and spent my money wisely, the overwhelming majority of Modern Era cards were within my grasp. That line of thinking drastically changed in the summer of ’91 when Topps 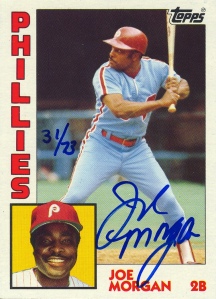 issued its first Stadium Club set. To employ a horrid sports cliche, the set was a instant game-changer for me; at that moment I realized I was no longer going to be able to purchase complete sets of every new set issued, while simultaneously working on completing my pre-1981 sets. Up until then, I had two separate collections: my primary collection, where I tried to collect one of everything, and a duplicate collection of just Phillies cards that was a sideline to the main collection. Within a couple days of the release of Stadium Club, I started trading, selling and cannibalizing the primary collection with the goal of building the most complete Phillies collection possible.

For a number of years, this worked. Throughout the ’90s and until roughly the middle of 2003, I did a fairly good job of collecting every Phillies card as they were issued (for the most part, I didn’t bother with parallels, as I didn’t and still don’t see much point in them) and managed to complete every Phillies team set back through 1950 (with the notable exception of the 1951 & 1952 Topps sets).

Are there actually 10 people out there (other than me) who would want this card?

However, assembling and maintaining the collection was taking its toll on me. I was no longer enjoying collecting — it felt like it had become a rather expensive job. The sheer quantity of new product was exhausting, but more importantly, the print runs on the inserts were starting to become ridiculously small. So small in fact that I finally had to accept the fact that I wouldn’t be able to add all of them to my collection. Even if I had all the time and financial resources necessary for the task, there was just no way I could collect one of every Phillies card ever made. It just wasn’t possible any more.

Luckily for me, this second game-changer coincided with the birth of my son. It allowed me to walk away from the hobby in a meaningful fashion and gave me plenty of time to think about how I wanted to continue collecting. Until roughly 15 months ago, I used my far more limited resources to collect only the cards that I genuinely liked and/or really wanted to have in my collection. As I returned to building a more comprehensive collection, I’ve filled in many of the gaps in the main sets and cheaper inserts. I have also acquired, when and where I could, some of the much-harder-to-find inserts. I even made a goal of attempting to collect a couple of full team

insert sets with really small print runs just to see if I could. The biggest of these is the 2003 Donruss Team Heroes Autographs. Currently, the only one I’m missing is Mike Schmidt. Sadly, there were only 10 Schmidt cards printed, and the chances are exceedingly remote that I will ever have the money to spare at the moment that one ever becomes available again. However, I did manage both the Abreu and Carlton cards, so I feel certain sense of accomplishment on that front.

Eight years later, it’s still sometimes difficult to not pursue one of every Phillies card. I know I don’t have the time or the resources to do it. However, that teenager from over 20 years ago still lives inside of me, and he can’t let it go. Although I wish that Topps (and by extension everyone else who printed cards over the past 20 years) wouldn’t resort to such gimmicks in order to raise interest and/or demand, I do understand why they choose to print cards in such limited numbers. That doesn’t mean, however, that I have to like it.

Note: The combined print run of the four cards featured in this post is 138.